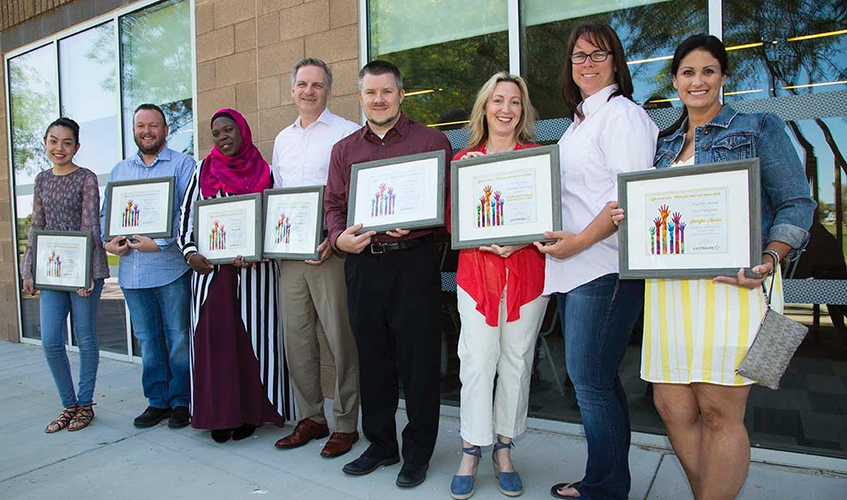 Life is an echo. What you send out comes back.

Eastmark is a community of doers. It’s filled with neighbors who see a need, roll up their sleeves, and jump right in to help.

It has neighbors who every day give selflessly of their time and talent, not for the notoriety, but for the betterment of the community in which they live. This collective impact, like an echo, expands and touches lives far and wide.

Each year during National Volunteer Week, we like to take a moment to tip our hats to those do-good neighbors who inspire us to serve others.

This year on April 21, the Community Life Team hosted a volunteer appreciation celebration to thank all Eastmark volunteers, and to honor the community members selected for The Echo Awards. Three cheers to this year’s award honorees:

Rob is a community steward who partners with others to solve community challenges. He led the Eastmark Leadership Class 3 Jingle Jog team project, coordinated the CFD and QCUSD Bond Q&A, and formed the group Eastmark Dads of Special Needs Children.

Jennifer is a neighbor who exhibits genuine concern for the welfare of others and believes in the power of community to improve lives. She formed an Eastmark chapter of Girls on the Run, serves on a committee for teen programs in our community, and regularly coordinates donation drives for the homeless in downtown Phoenix.

Brianna is regularly involved in school and community activities. She coordinates service activities for Eastmark residents at Feed My Starving Children, she’s a member of National Honor Society who has held many officer roles in that organization, and she’s volunteered at numerous Eastmark events.

This year, we could not choose just one individual to recognize, so instead we have three.

Adeola is committed to making Eastmark the best place it can be. This year she initiated the Eastmark Street Squad, a monthly litter patrol throughout the community that engages neighbors of all ages to take pride in their community. She’s also a member of Eastmark Leadership Class 3.

Patrick helps connect neighbors through his involvement in the Eastmark Leadership Alumni planning committee and the Imagine Mesa task force, representing District 6. He also supported his wife Elsa in the planning of the USO service project during last year’s Veterans Day breakfast.

Matthew is a positive, solutions-oriented voice in our community. He served on the Imagine Mesa task force representing District 6, is a part of the Eastmark Leadership Alumni planning committee, and is regularly engaged in the Eastmark Board of Directors meetings.

Melissa Helmcamp, Tisha Huish, Holly Crea, Beth Wollman and Jennifer Lindstrom created an event that has had a significant impact on the community. The Color Run is an example of what can be achieved when we work together as a community. It’s a collaboration among PTO/PSO and Booster organizations who represent the schools within Eastmark and the surrounding area. The funds raised go to the schools to build new sections of playgrounds, buy new books, support teacher bonuses, and more.

We’d also like to congratulate all those who were nominated for an Echo Award this year, including:

Next spring we’ll have another call out for The Echo Awards nominations, so keep an eye out for neighbors and community members who are making a positive contribution in Eastmark.