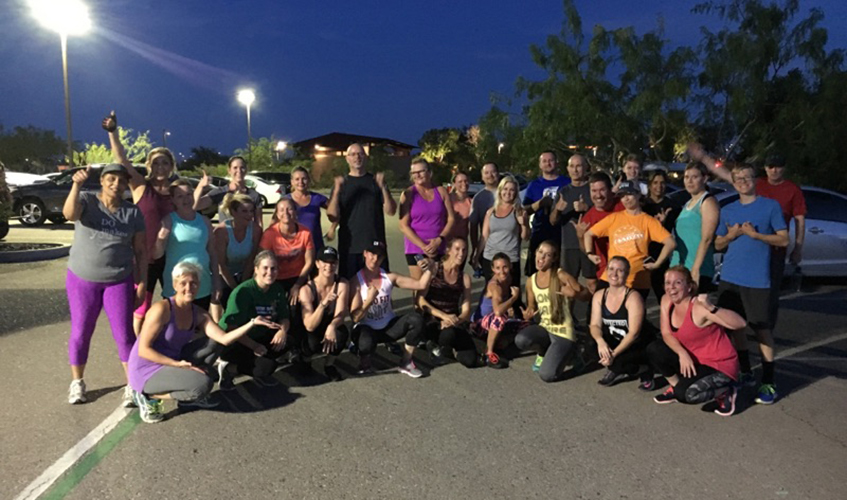 I am Eastmark is a movement born from the aspirations of our most inspiring residents. These residents inspire not because of what they do, but because of who they are—ordinary people doing often extraordinary things. Their commitment to health and fitness, family and friends, kindness and compassion resonate and motivate others to follow suit. They embody the Eastmark spirit. They are Eastmark. Meet Glenn Odonal. He landed in Eastmark by way of the Pacific Northwest and brought with him a passion for changing people’s lives through fitness. He’s conquered the Tough Mudder, navigated the waters of Arizona’s lakes, and is keeping Eastmark active one boot camp at a time.

What brought you to Arizona?

My wife, Rhonda, and I moved to Eastmark from the Seattle area in June 2015. She had the opportunity for a promotion in Arizona and my employer at the time was also located here, so it made sense to make the move.

We were also starting to look at places to retire, and Arizona was one of the three spots on our list. And the desert has always felt like home to me.

Why did you choose to make Eastmark your home?

It was really by accident that we found Eastmark.

After spending the day looking at homes with a realtor, I wanted to venture out a bit more, and I happened upon Eastmark. I checked out the models and found a Maracay home I thought my wife would really love.

When I brought her back out to see the house, she walked in and said ‘This is it!’ We now live over by Kinetic Point Park.

What is your background (family, hobbies, career)?

In Arizona it’s just my wife and me. We have a daughter and grandchildren who live in the South, and we get out to visit them at least once a year. Our oldest grandchild actually spent about a month here with us this summer.

I’m a competitive, active guy and have a passion for helping people and being an example for others. I love water sports, and just being around the water. I’m in a Fantasy Football league and I enjoy watching football, basketball, and baseball during the playoffs.

I also like to run. I’ve participated in the Tough Mudder here at Eastmark, and I’d like to complete a marathon and eventually the Ironman triathlon.

I’ve worked in management for 23 years, and eight of those years were in the fitness industry. I’m currently a district manager at Young’s Market Company.

I’m also a member of the Eastmark Leadership Class 3, which has been a wonderful opportunity to meet fellow residents who also want to see positive growth in the community.

I’m a competitor by nature, so when I stopped working in the fitness industry, I felt like something was missing. One year ago I launched the Caffeine Kick Boot Camp and Running Club right here in Eastmark.

The name actually originated back in Seattle when I was working for 24 Hour Fitness. Back then I had an addiction to coffee and needed to kick the habit. My alternative to coffee was the boot camp, so that’s how the name came about.

My family also has a not-for-profit that they run in Detroit which hosts a variety of sports clinics (football, basketball, golf) so fitness has always been a passion for me, especially during the past 10 years.

Our first Caffeine Kick Boot Camp last September had five participants, and the Running Club had one. But over the last year we’ve had close to 150 participants. The boot camp meets Tuesdays and Thursdays at 6:30 p.m. and Saturdays at 8 a.m., and the running club meets Saturdays at 7 a.m. All fitness levels are welcome. If you’re looking for a challenge, we’re definitely going to challenge you. If it’s your first time doing a boot camp, we can tailor it to your fitness level.

On Sunday, Oct. 8, we’re having a second fundraising boot camp to help those affected by the recent hurricanes. The boot camp will run from 8 to 9:30 a.m. at The Eastmark Great Park. Anyone can participate and donate what they’d like. Donations will go directly to the American Red Cross. We’ve partnered with other fitness coaches in the area so participants get to work with various trainers at multiple stations. This time we’ll also have a mini boot camp for the kids.

I also recently launched G-Fit Solutions which is a lifestyle brand focused on a more personal, customized approach to fitness. It’s me sitting down with you talking about your goals, and then spending a lot of time on what your interests are as they relate to physical activity. I’ll also be training others who want to be fitness coaches. If any Eastmark residents are interested, they can reach out to me by email.

What do you think makes for a strong community and what characteristics do you value in a neighbor?

First and foremost, you need to have residents who care. You need residents who are willing to put themselves out there in the community in order to make a difference.

It’s important to figure out the pulse of the community and then see where you can fit in based on your own personality and what you like to do.

I’m so thankful that in Eastmark I have an outlet to change people’s lives through fitness.

I value integrity in my neighbors. If you see something, be that neighbor who will stand up and say something instead of looking the other way.

I also value the willingness to have a conversation, and in Eastmark there are so many different opportunities to meet your neighbors and start that relationship.

What’s an interesting fact that your neighbors might not know about you?

I’m a die-hard Steelers fan. The first game I watched on TV with my father was the Pittsburgh Steelers versus the Minnesota Vikings. The Steelers also happened to win the Super Bowl that year, so I was locked in.

Do you have a fabulous neighbor you’d like to see featured in an upcoming #iameastmark resident profile? Let us know.